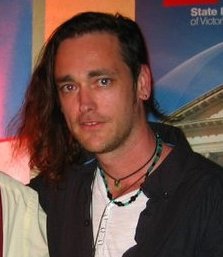 Nathan Curnow is an Australian writer and spoken word performer. In 2007 he stayed overnight at ten haunted sites around the country and wrote a book about his experiences, The Ghost Poetry Project.
When did you first start writing poetry? What do you enjoy most about it?
Like most people I mucked about with poetry as a teenager and wrote some terrible rhyming stuff full of archaic language, but I truly began when I was first introduced to contemporary poetry in university and realised that it was more than I thought.
I enjoy the challenge and complexity of poetry, although it leads to what Les Murray calls the ‘painless headache’.  You end up agonising over every little thing, teasing out the worth and power of every word.  Poetry is short but expansive, powerful but frail, hard work but also play at the same time, so I guess I enjoy the mystery and contradictions of it.
Tell me about the first poem you had published. What was it about etc?
It was published in Swyntax No.4 in 2001 and is called She Swings Content in Sleepy Mood.  It’s about a girl swinging on an old tyre amid a sunny afternoon.  I was really proud of it at the time of course.  It was a big deal for me.  But on occasions like this when I fish it out of the box and look at it again I cringe.
What is your usual writing routine? Do you write every day?
I work in fits and starts around the demands of my family, and have done ever since I began.  But even when I don’t write for a day or two I still have my head in the project/s I’m working on.  Things have to stew for a while in the Crock Pot of my mind and that’s just as important to the process as banging on the keyboard.
What advice would you give a would-be poet?
Read and write.  Do your homework on the journals and editors that you’re submitting poems to.  Know that grit, fire and dedication always pay off in time.  The path comes with significants costs and it’s easy to get bitter about them (but that’s the same with anything), there are many privileges along the way too.
What’s your opinion of self publishing? Would you recommend it?
Generally I would say that if you’re going to self-publish then wait until you’ve had a number of poems in journals or have a few awards under your belt, but things are changing so quickly these days, along with the stigma of self-publishing.  When I was starting out I self-published a novel as a bit of an experiment and although it didn’t get very far it was an important step (albeit a little misguided) towards considering myself a writer. So would I recommend it?  Sure.  If it doesn’t take off then it won’t be the end of the world, and you always have to back yourself.  Take risks.
Do you perform your poetry? What are the differences between writing for the page and writing for the stage?
I have been performing for about as long as I’ve been writing, which has led to some good, some bad and some very strange gigs.
The page and stage are two very different spaces and filling them successfully demands different skills, but they’re also related, just as the line and the breath are related.  The blank page can be unforgiving and expose the weaknesses of a poem whereas the stage can throw up so many variables on the night that you have to be on your toes.  And yet whether you work on the page or the stage you still have to address similar questions ie.  What is my poem about?  What is its core/tone?  What’s the best way to convey it?  Where do I want to take the audience? etc.
Have you been inspired or influenced by a particular poet’s work? How did it affect your own work?
Kevin Brophy’s work has been a huge inspiration and I learn something every time I read it.  His poems showed me how to write about the things I knew, such as my religious upbringing, parenting/fathering and the domestic life.  I encounter play, depth, risk and passion in his work, plus an attention to the twists of language.  His work asks questions of poetry itself, and with such deceptive, disarming simplicity.
What about the masters? Who would you choose and why?
I don’t have any hard and fast loyalties regarding the masters. Perhaps I can answer the question with poems instead.  Here are a few (among so many) which I will always love:
Kubla Khan (Samule Taylor Coleridge), Ulysses (Lord Alfie Tennyson), Beach Burial (Kenneth Slessor), The Secret (Denise Levertov), I’m Explaining a Few Things (Pablo Neruda), St Petersburg (Keith Eisner), Burro (Cate Kennedy), What the Light Teaches (Anne Michaels), Free Union (Andre Breton), Inside a Tree (Doris Brett), Stalingrad Briefing, 1943 (Ian McBryde), The Hand (Sharon Olds).
Please include a favourite poem of your own to be published with your interview and tell us a little about it.

each tier of a pine tree is a curved whale boat
launched into the sea at dawn, lost at dusk
beacons are lit, soft language upon the horizon

a glowing ship marks the earth’s turned side
steering on mutineers’ blood, history is towed
like the Lord’s Whale, boiled down, into song

enjambed, the living upon these stones broke
stones to anchor old dreams, from the work
of hands the shore is made—rowing forward

heaving back, rowing forward—Come Ye Blessed
memory like shadow is best stored upon itself
though darkness refuses to pass without trade

claim the red earth turned for good, climb
like a seed, spread even on the wind, silhouette
upon the dawn, beneath the freshest star you are

here, departed, sing with us yourselves back home

I chose this one because it comes from an amazing experience I had on Norfolk Island, and was written as a kind of thankyou for the hospitality I received.   It was also translated into the Norfolk language by Archie Bigg, so I’m very fond of it.

I became fascinated with the history of the Pitcairners following their relocation to the prison-island—how they traded for what they needed from passing ships and taught themselves the skill of whaling.  If a whaling party failed to return by nightfall beacons would be lit upon the cliff-tops to guide them back home.  Norfolk Island is so small that if the men steered on the wrong course, were out by even the slightest fraction, then they ran the risk of missing the island altogether and becoming lost in the Pacific.  (The ‘Lord’s Whale’ is the name given to the biggest whale they ever caught).

It was first published in Island 119 (2009) and then in my collection The Ghost Poetry Project (Puncher and Wattmann).

No Other Life But This - Published by Five Islands Press 2006.  Out of print, but available from the author.

Interview at Verity La
http://verityla.com/2011/02/13/the-haze-and-hard-burn-of-nathan-curnow/
Interview at The View from Here:
http://www.viewfromheremagazine.com/2009/11/ghost-poetry-project-interview-with.html

Indiefeed audio Made from the Matter of Stars: http://castroller.com/podcasts/IndiefeedPerformance/1101410

Email ThisBlogThis!Share to TwitterShare to FacebookShare to Pinterest
Labels: Nathan Curnow, No Other Life but This, poetry, The Ghost Poetry Project, writing