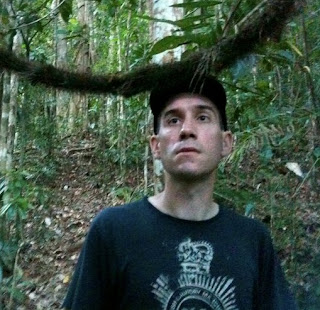 Stu Hatton is an editor, writer and reader, currently based in Melbourne, Australia. In 2006 he was awarded a mentorship through the Australian Society of Authors, which he completed with the late Dorothy Porter.
When did you first start writing poetry? What do you enjoy most about it?
I’ve always been drawn to language that is strange, unsettling, magical, impossible. And for as long as I can remember I’ve enjoyed playing with language, exploring its possibilities and flaws. This love of language-play began before I could write. As a child I tended to create stories and songs as opposed to poems, and I loved Lego. Perhaps in a way poetry took the place of Lego. The latter probably left its mark on me in various ways: a kind of faith that anything can be constructed from anything, the possibilities of construction and collage, combining fragments in unlikely ways. So poetry is a form of play for me, which doesn’t mean it isn’t vital, political, spiritual … it can be all of these things.
Tell me about the first poem you had published.
I had a satirical poem about the film Jurrassic Park published in the school magazine in year 10. It had a line in it about ‘converting to Spielbergism’ or something. I have to laugh at my 15-year-old self there.
What is your usual writing routine? Do you write every day?
Yeah I pretty much write every day. I tend to do most of my reading in the morning, and writing often sparks off from what I’m reading. I carry a pen and notebook most of the time, or else I type notes into my phone. I’m always collecting words or phrases to use later.
What advice would you give a would-be poet?
To experiment with different practices of reading, writing, thinking, questioning. Try anything once. Break habits, be flexible and try to cultivate open-mindedness.
What’s your opinion of self publishing? Would you recommend it?
I self-published my first book How to be Hungry through the print-on-demand service Lulu. I’d recommend self-publishing if you’re prepared to be a hardworking ambassador for your work.
Do you perform your poetry? What are the differences between writing for the page and writing for the stage?
I’ve performed my poetry publicly many times, though not so much recently. I guess I’ve tended to see myself as writing for the page more than the stage. Sometimes I’ll adapt a poem slightly for performance, perhaps if there are visual aspects, puns or other elements that might not be conveyed by voice alone. One thing that can irk me as an audience member at poetry gigs is that if you miss part of a poem, that’s it: it’s gone. The mind wanders, there are distractions, sometimes you can’t hear every word due to the poet’s delivery or other sounds intruding. Listening to readings takes a certain kind of discipline. Not to take away from the possibilities of mishearing, or only hearing fragments: these are interesting possiblities if you’re open to them. But generally I prefer to be able to sit with a poem, consider it, put it aside and come back to it. Or in the case of recordings, to be able to play it again, hear it again if I want to. So I’m interested in forms of performance that go beyond simply reading a poem. Performance poetry goes beyond ‘simply reading’, but I guess I’m mostly interested in multimedia performance, video poetry, etc, where oral and visual text can be combined.
Have you been inspired or influenced by a particular poet’s work? How did it affect your own work?
I’ve given this some thought, but it’s very hard to pick just one! I’m inspired and influenced by countless poets. In my late teens it was Eliot, Yeats and Cummings. Then I discovered the Beats, then as an undergrad I gravitated towards the New York School and Language Poetry. I guess I’ve tended towards the experimental/avant-garde end of the spectrum in terms of finding models for my practice. John Cage is definitely an inspiration to me, as is Gary Snyder – both, in their own way, pull down the fence that’s sometimes erected between art and life.
If you had to choose a favourite contemporary poet who would it be and what makes them your favourite?
Once again I find this almost impossible to answer! I have too many favourites I guess. In terms of contemporary Australian poets I’m drawn to, and who are maybe operating in similar ballparks to me, here’s a list (though I’m probably forgetting a few people): Patrick Jones, Pam Brown, Michael Farrell, Jill Jones, Laurie Duggan, Ted Nielsen, Tim Wright, Ken Bolton, Emma Lew, Astrid Lorange, Derek Motion, Peter Minter, John Tranter, Ania Walwicz, Lionel Fogarty, Joanne Burns, Martin Harrison, Paul Hardacre, Keri Glastonbury, Neil Paech.
What about the masters? Who would you choose and why?
Okay, for this one I’d have to say William Blake. Poet, painter, printmaker, prophet. His legacy is fascinating, illuminated, sort of infinite. Perhaps more so than any poet who has written in English, he broke free of the ‘mind-forged manacles’ of his time. That is something to aspire to.
Could you please send me a favourite poem of your own to be published on the blog?
How to be Hungry, published 2010, available through Lulu.com: http://www.lulu.com/spotlight/stuhatton
Audio poem ‘power ballad’ on SoundCloud: http://soundcloud.com/wordy/power-ballad
Twitter: @StuHatton
Facebook: http://www.facebook.com/stu.hatton
Web: http://www.stuhatton.net
Posted by Lisa at 7:11 PM