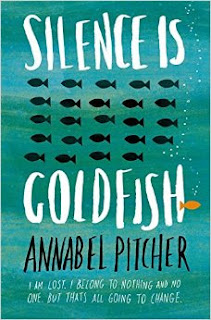 Silence is Goldfish by award-winning novelist - Annabel Pitcher, author of - My Sister lives on the Mantelpiece & Ketchup Clouds.

Fifteen year old Tess accidently discovers that her Dad Jack is not, in fact, her Dad. She was conceived with donor sperm and Jack’s honest account of his feelings at the moment of her birth leave a lot to be desired.

Tess is a fat girl, bullied by the most popular girl at school, Anna. Tess’s best friend is Isabel is a quirky Tolkien fan who is rarely serious about anything. Tess is quite immature I think, but that can be common for teens with low self-esteem. Rather than confront her ’dad’ about her discovery or speak to her mother about it, Tess takes a stand in a selfish way that affects all of her relationships. In some ways I think she is rather self-indulgent and melodramatic, but then I try to put myself in her shoes. She is shocked. She is hurt. She is confused. She has only one friend, who seems unable to be serious for long enough for Tess to confide in her, so she has to deal with this all on her own, whilst being bullied and ostracised. Those teen years can be rough.

She shuts down, shuts off. Selective mutism. An extreme effect of the shock of finding out the secret. A plastic torch in the shape of a goldfish becomes a ’security blanket’ item for her.

Many fifteen year olds have probably felt the urge to run away and find a different family, a new - better - nicer - mum or dad. Tess is looking at every blonde-haired male of the large-boned variety to see if their eyes are brown, meaning they could possibly be her father, after discovering the six-hundred and seventeen secret words Jack has typed into a file called DCNETWORK on his computer.

The age-old “who am I” question features large. Who am I, and where do I fit in, is a question many teenagers face in the search for their identity, within and outside of their families. The journey from child to adult is not measured in years alone. There is no magic time span to calculate it. Adulthood is not achieved like a level-up in a computer game, a pre-destined, pre-determined path to reach a certain point and win a prize. Let’s face it, if adulthood is the prize, many of us would feel pretty ripped-off. The maturity and self-awareness that marks us as adults, takes longer for some than it does for others. This transition is painful. For Tess, the pain factor shoots through the roof and her mind becomes obsessed with the fact that Jack isn’t her father, and that a substitute teacher might be.

Tess is a girl striving for authenticity, but it’s hard to be your authentic self when you’re not sure who you are. She’s lost her sense of belonging, and in her search for it she becomes obsessed with the relief Math teacher Mr Richardson, but he has secrets of his own. The only person left in her word that she trusts is her Gran, and she worries that her parents are going to put her into care.

This story proves the idea that people never say what they mean. This is true of the adults in Tess’s life, especially Jack and the neighbour Andrew. They exchange what might seem like morning pleasantries between neighbours, but are more about what isn’t said, and are rather passive-aggressive. Tess’s parents have been trying to push her to fit in. But is ’this’ what fitting in looks like?

Jack tries too hard. He signs her up for things ’he’ did in high school, like theatre and dance. He is trying to make her be like him because she is clearly ’not’ like him, which only reminds him that she is not his trueborn daughter.

Tess’s voice carries the story even though she is mute for the better part of the book. Her interior dialogue and ’conversations’ with Mr Goldfish carry the story forward towards its climax. My favourite Tess-ism is “...and that’s a hard fact sitting in my brain, giving me acid indigestion of the mind...”

I found Silence is Goldfish to be compulsively readable, due more to the writing style than the story itself, which did drag at times and seem somewhat repetitive.

It’s a quick read. The writing style is chatty from the first person POV. Being mute, being silent, changes Tess. She becomes stronger, braver, if a little crazy with her back and forth discussions with Mr Goldfish, the kids torch she bought on the night she meant to run away. Tess is a likable character, introverted and a little nutty but kind-hearted. She learns a lot about listening while she is mute. Adults become a little too free around her. She is either forgotten or taken advantage of. Either way she learns a lot about adult relationships and secrets. She finds an unexpected ally along the way. Tess’s safe, insulated, world is turned on it’s head by a secret that is not run of the mill for a story like this; but like most teenagers going through the angst of family drama, and school, and friends, her world rights itself in a way that is realistic and ultimately a satisfying conclusion. I enjoyed it.

Review - The Sky So Heavy

‘You never know how strong you are until being strong is the only choice you have.’ 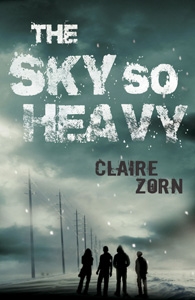 This is the story of seventeen-year-old Fin and his twelve-year-old brother Max, a nuclear ‘accident’ and the events that follow. Written by an Australian author, set in an Australian landscape – The Blue Mountains – this is a dystopian survival story that piqued my interest from the start.

Zorn is quick to establish her characters ‘normal’ world – school, friends, crushes, and home life – before dropping them into a survival situation. Nuclear winter. These boys must quickly learn to fend for themselves without the aid of adults. Their parents are absent and it is soon apparent that the adults remaining cannot be relied on to behave in the usual way. Even the police can’t be trusted.

Tragedy and disaster have a way of bringing out the best and the worst in people. There are two ways people commonly react, they can become selfish, fearing only for themselves and their own situation, or they can become selfless, banding together to help those in need.

‘The true measure of a man is how he behaves when no one is watching.’

Take Starvos, the local shop owner, for instance. At first he is only concerned with how much money he can make. He makes a show of caring about everyone in the community by limiting the number of items people can buy at any time, yet he immediately doubles his prices. Later, with no idea how long the current situation will continue and concerned only for himself, he closes his shop, hides the food out of sight and is prepared to kill to protect it.

The tension builds steadily as the food runs out and people become desperate, but after reading more than 100 pages I began to wish something new would happen. There wasn’t enough action and the same goals and obstacles were repeating themselves. Thankfully, it wasn’t long before the story shifted. Along with Lucy, Fin’s crush, and a boy from their school, Fin and Max finally leave the mountains and head for Sydney in search of their mother, who incidentally works for the government.

Survival of the fittest.
Dog eat dog.
Every man for himself.
Us and them.

These are the clichés and themes that filled my mind while reading The Sky So Heavy. The idea that some people are more deserving of life than others, more worthy of being saved and protected, is the refugee situation at its core. I’d be blind not to see the parallels between this fictional story and the plight of those seeking Asylum on our own shores. Zorn shines a light on Australia’s Asylum Seeker situation and the way fear and greed and misinformation can be used to support the ‘us and them’ mentality. Inhumanity.

This is our Country.
These are our resources.
You don’t deserve them.
You are not one of us.

Segregation is not a new concept in society, but the divide between the haves and the have-nots has never been more obvious. The outsider, the old, the sick, the young, the disabled, the injured – who is useful, and therefore worth saving, worth spending money (resources) on, and who is not, is reminiscent of Nazi Germany.

Zorn undertakes an unflinching dissection of human behavior under extreme conditions. People either keep their humanity in the face of incredible challenges, or they lose it, and in doing so lose themselves. It’s these near-future potentially possible scenarios that frighten us most I believe, simply because they are believable. The likelihood of them happening within our lifetimes is real. And that is terrifying.

In a world, fictional or otherwise, where money no longer has power, it is those who control the giving or withholding of our basic human needs, such as food, water, shelter and safety, who hold the balance of power. How willingly they reject those in need reveals all.

It’s been said that ‘truth is stranger than fiction’, but it’s also been said that ‘fiction shines a light on the truth’. Zorn has positioned her spotlight well.
Posted by Lisa at 7:05 PM No comments: