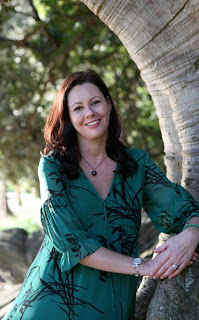 On a rather dismal wintery Sunday in June I joined a group of thirty or so like-minded souls as we absorbed some writerly lessons from Australian author Kate Forsyth. Already a fan of Kate's work, which has been widely published to critical acclaim, I was keen to learn some of her 'secrets' to success.

The morning was dedicated to "The secret structure of story" - something with which I, with three unfinished novels moldering away for want of the skill and confidence to finish them, need all the help I can get.

"The story dictates the structure - the more complex the story, the more important the structure," Kate said. She likened a novel to a train, with linking carriages - a causal chain of events. She said the novels that fail are often 'episodic' in nature - some publishers even have an acronym for them: ODTAT - "one damn thing after another" - the incidents have no reason, no purpose. In a novel, each scene must lead to the next, there must be a story arc, a sense of rising tension that eventually reaches the climax. To make sense, and be satisfying to the reader, the climax must be the result of everything that came before.

Kate told us a book should offer a cathartic experience for the reader. "You want your reader to feel something," she said. The best way to achieve this is to create a character the reader can connect with. "You want to connect reader and character as soon as possible." Kate spoke about the amount of space the writer gives their characters on the page as 'screen time', saying that "the more time spent with a character, the more emotional connection the reader will have with them." She also said it's a good idea to put your characters in jeopardy - physical or emotional - to heighten that connection.

Later in the day Kate spoke about 'writers block', explaining that true writers block has nothing much to do with fear or not having any ideas or even having too many ideas - though these can all stop you writing - but is more about being 'stuck'. "If you're stuck, you don't know enough about your story," she said, "you don't know your characters well enough. Go back to your original notes. Review your plan. If you haven't made one, now's the time to do it."

This day gave me what I needed - a large dose of inspiration and a gently administered kick in the pants. I already 'knew' so much of this. I'd lost my confidence and forgotten the lessons learned while studying for my Diploma. I've always been a 'pantser' not a 'planner' (even if you're not a writer I think you'll understand the difference), but on this day I finally realised that some amount of planning is not only helpful but necessary.

The big lesson would-be authors need to remember is that there's no magic formula to writing a novel. The 'magic' that ultimately ends up on the page gets there through sheer determination and will. My favourite tutor at TAFE once told me that the difference between an amateur writer and a professional writer is determination, paraphrased from Richard Bach's original quote which Kate shared with us this day - "A professional writer is an amateur who didn't quit". 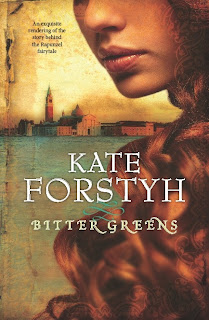 Kate's latest novel, Bitter Greens, interweaves the Rapunzel fairytale with the scandalous life of one of the tale's first tellers, Charlotte-Rose de la Force. Moving from Venice in the 16th century to the glittering court of the Sun King, Louis XIV, in the 17th century, Bitter Greens is a story of desire, obsession, black magic and the redemptive power of love.

You can find out more about Kate here.

Kate is interviewed elsewhere on this blog here and here.
Posted by Lisa at 1:05 PM No comments: