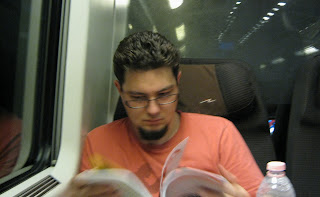 
When did you first start writing poetry? What do you enjoy most about it?
During high school, I think I was about fourteen. They were a mixture of awful teenage poems and hopeless recreations of The Beats, and I think I was relying on the natural world a lot too. Probably the best thing about them was the simple fact that they could be finished in a reasonable amount of time. Not like a novel, and I liked that.
Tell me about the first poem you had published.
The first poem published was by the dubious folk known as, variously, ‘The International Library of Poetry’ the ‘International Society of Poets’ and the ‘International Poetry Hall of Fame.’ It was exciting for a kid, but after being given an ‘offer’ to pay a lot of money to travel overseas for their award ceremony, the shine was of course tarnished. It was about animals in a forest or a jungle (it seems to change a lot when I look at it now) and was heavy on imagery. And bad.
What is your usual writing routine? Do you write every day?
I do write every day, but it’s difficult. The time I have to write varies of course, and what qualifies as ‘writing’ does too. It might be part of a story, haiku, verse poetry, a lesson plan or something for uni. Like most of us, with obligations all over the place, that time gets eaten away – especially in daylight hours. I usually end up writing late into the night. It’s quieter and my mind seems to work better then, though in the morning I’m usually not impressed with myself for it.
What advice would you give a would-be poet?
Read widely, because in some ways that is your preparation – but just as importantly, don’t forget to actually write. Don’t think or talk about it, don’t plan to do it, just write. That one sounds obvious but sometimes it isn’t I guess, sometimes (in all fields) we can become obsessed with preparing.
I’d also suggest one of the best pieces of advice I’ve ever been given – that is to switch mediums. If you hit a wall with writing, paint for a while. Or turn to music, or something else artistic – or even something not artistic at all. Just get some distance, recharge with that other art form then come back to poetry and you should have some more ammunition.
What’s your opinion of self-publishing? Would you recommend it?
I am a fan of self-publishing if you have two things: a good instinct (or editor-friend) for quality control and a base in a metropolitan area. Make that three things, if you’re personable. If not, I think it’d be hard to sell your books. When you self publish you’re afforded control of your work, from layout to cover art to content, which is awesome. It’s tough however, when you get to things like distribution – which is why I mentioned that second point. If you live in or near a city at least, you’ll have easy (and cheap) access to events and markets and you should thus be better able to sell your work.
Do you perform your poetry? What are the differences between writing for the page and writing for the stage?
I do, though not as much as I’d like. The difference for me is in the audience – because, of course, it’s live. It’s immediate. I imagine it’s a bit like acting or standup vs a film. In a film, the reaction to what you’re doing or have done, it delayed (or absent). On stage, you hear the audience, see the audience, and get an immediate sense of what your material is like. It’s very nice – it can certainly be daunting, but it’s something you get at no other time as a writer.
Have you been inspired or influenced by a particular poet’s work? How did it affect your own work?
In the beginning it was the Beats, and rock and folk lyricists, but perhaps the most important influence would be from haiku poets. I think whatever imagistic elements are present in my work are due to influence of the haiku masters like Basho and Issa. What they did, I believe, is demonstrate beyond a doubt (among other things), that narration can be achieved indirectly, through images created by just a few words. I’ve since then continued to struggle to achieve that ‘economy of words,’ and to prune back my natural tendency to overwrite!
If you had to choose a favourite contemporary poet who would it be and what makes them your favourite?
Graham Nunn. For his ability to floor you as a reader – whether it’s through his imagery, his tenderness or his insight, but for his commitment to the art form and to those around him too. (I thought I should mention that I added that last bit to my answer not to detract from his poetry, or as an attempt to bolster it, but rather as a very serious and equally important aspect to Graham as a poet. I don’t feel the worth of poet should be just the measure of their (published) output, and so I’d like to suggest that Graham’s skill as an editor, promoter, organiser, motivator and supporter is just as powerful and valuable to the community as his written work.)
What about the masters? Who would you choose and why?
Here I can combine a few things together – this one is a haiku that Graham reminded me of when I interviewed him last year.
on Starvation Ridge
little sticks
are trying to grow

and it’s by Jack Kerouac, so there’s an Australian poet, haiku and The Beats all in one answer! What I enjoy about this most is probably the verb ‘trying’ or perhaps the simple, effective contrast between ‘Starvation’ and ‘grow.’ It’s also a great demonstration of why the 5-7-5 syllable count isn’t needed in English language haiku. This doesn’t adhere to those limits but it is undeniably a haiku, and it evokes a story through the image.
other objects

my wedding ring is a plain silver
barrel band. same as dad’s, very modest
and very hard to keep smooth,
with scratches I can’t keep track of and
don’t want to hide. it’s no good pretending
the marriage is perfect, no use
hanging all our memories and every
step of the future on just one symbol. other
objects speak of love, too. the weeping
maple we’ve shifted to every house, the
cup we fill with knives and forks
or the handwritten address you gave me
the night we met, walking the city
and flinging orange peel into hedges, things
that endure, things that have lines
and marks to prove them.

Why is it your favourite?
Other Objects is probably my favourite because it’s hopeful without being treacly, and I usually find those poems really difficult to write. I think it paints a realistic picture of marriage, and it was through this poem that I was able to recognise a habit I’ve picked up, of writing about objects and the store of emotion we seem to place within them.
Where was it first published?
July 2009, in Island – a journal I’m very happy to have appeared in, it’s always beautifully presented and has such great material, cover to cover.
What was the inspiration for, or story behind, the piece?
I suppose it addresses my belief and concern, perhaps, that my marriage not become snagged on a single symbol, and that the wear and tear of the marriage is ultimately just as important as any other aspect. It runs through a few other objects that have memories attached to them, triggering for me, the night I met my wonderful wife.

Find out more about Ashley here.