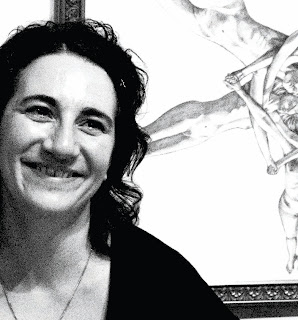 Tiggy Johnson is a Melbourne-turned-Brisbane writer and editor whose stories and poems have appeared in various literary magazines and on Melbourne trains. Her short story collection 'Svetlana or otherwise' was published in 2008 and her poetry collection 'First taste' in 2010.

When did you first start writing poetry? What do you enjoy most about it?
Excluding limericks about my high school teachers and classmates, I started writing poetry about six or seven years ago, when a friend from my writing group, where I only ever took fiction, pushed me into it. Writing poetry helps me deal with difficult times, particularly the passing of my grandmother and later my father, while at the same time helping me keep those moments and memories alive. At the other extreme, I like it for the same reason, that it helps me hold on to the special moments that come with being a parent, like watching my baby daughter discover for the first time that she was controlling her hand movements. I also like that I can fit poetry writing into my busy life, compared to needing to schedule time in for writing fiction.
Tell me about the first poem you had published.
The first poem I had published (I think) is called ‘Minutes’. It was originally published in Tamba 38: Winter 2006 and has been republished online here. It’s about that difficult time in life otherwise known as the first year of being a stay-at-home mum. I wrote it initially as prose, but it didn’t work, and soon after trying poetry, I had another go at it. The hope at the end was added at the very last rewrite, perhaps to make it (more) appealing, though also because I felt a little apprehensive of putting it out there otherwise.
What is your usual writing routine? Do you write every day?
I don’t have a usual writing routine, except that I like to take a month or two off writing every year, partly so I can feel that itch to get back to it again. I like paying attention to my process though, and once I notice something that works, I run with for a while and then look for something new to try.
What advice would you give a would-be poet?
Accept that not everyone will like your style, which doesn’t mean it isn’t good enough. It just means you need a different audience. There are so many different styles of poetry, that everyone’s will appeal to someone. I’ve seen too many poets lack confidence because they think their style isn’t good enough, often because it’s not ‘academic’ (whatever that means) or what I like to call ‘arty-farty’. If you have something to say, say it. Then edit it (that’s probably two things, hey).
What’s your opinion of self publishing? Would you recommend it?
I think self-publishing poetry is very much accepted these days, and I say go for it. I do think it is a good idea to first accumulate a decent number of publications and to include both some of those and some unpublished pieces in the collection.
Do you perform your poetry? What are the differences between writing for the page and writing for the stage?
I do perform my poetry, though I sometimes prefer to think of it as ‘reading’ rather than ‘performing’. The way you communicate with a listening audience is different to when the reader has the time to ponder your words. You can often get away with a less polished version ‘on the stage’ and I sometimes use the opportunity of reading at an open mic to ‘test’ how I feel about a particular poem: it’s a great way to get instant feedback, mostly my own. I’d think twice about ‘performing’ a dense poem that could be too difficult for an audience to pick up on one listen, though I’m not sure I consider whether I’m writing for page or stage during the writing process: it’s something I think about later.
Have you been inspired or influenced by a particular poet’s work? How did it affect your own work?
Of course, and I’ll limit this to two poets (even though you imply one). First: Emilie Zoey Baker. I think she’s amazing for many reasons, but specifically she inspired me to have a go at writing what might be termed ‘feminist poetry’ though I wouldn’t call it that. Like her, I wanted to try this without the angst, ‘poor bugger me’ or other stereotypical attitudes that often come with ‘feminism’. I haven’t done a lot (nor any for quite some time) but it’s something I’d like to come back to. The second poet is Rosanna Licari, or particularly her book ‘An Absence of Saints’. For years I considered that writing poetry was my way of expressing myself and I pretty much only wrote about my own experiences and observations. Last year I took up family research, and I’m super keen to present much of my findings in poetic form, and this book is showing me how it can be done. It’s also great poetry.
If you had to choose a favourite contemporary poet who would it be and what makes them your favourite?
This question is too hard. I like many contemporary poets, for different reasons. As well as those mentioned above, I love that Sean M Whelan can write about love in ways that make it sound fresh and new, I love the way Ross Donlon can evoke emotions with strong images and more recently, I’ve discovered Michelle Dicinoski, who writes about ordinary people and events in extraordinary ways.
What about the masters? Who would you choose and why?
I would choose a contemporary poet over a master 49 out of 50 times, though I have been known to spend time with Sylvia Plath, as well as recently hooking up with a handful of haiku masters.

Please include a favourite poem of your own to be published with your interview and tell me what inspired the piece.

She’s on the lounge room floor, an eighteen
year old foetus, clutching her own through
layers of blouse and skin, her undies stained
with thick blood. Her cries are heard by
neighbours, though nobody comes.

Her mother is in the kitchen, pouring
gin into three glasses, the ice chinking
while she laughs with friends.

After four nights in a clinical bed, she
returns home to her own, continues
to rest. When she comes to breakfast
her mother makes tea and toast and says
you don’t have to marry him now.
She stares into her tea, whispers
but I love him, I want to get married
and so she did
for a while.


As part of the ‘genealogy’ poems I’m working on, there are a series of family secret poems. I’m titling these ‘Family secret #n’ where n is a semi-random number. I’ve written about ten so far, though my favourite of these is definitely ‘Family Secret #8’. It was published in Vine Leaves in February 2012. I can’t say too much about the inspiration (as it’s a secret) but it is one of the stories I uncovered in my family research that really affected me and made me rethink some of the things I already knew about some of my ancestors.

‘First taste’ was published in 2010 and is available via Tiggy’s website. It will also be available sometime during 2012 as an ebook.
Web : tiggyjohnson.com
Twitter : tiggyjohnson
'Daddy's Girl'
'Discovery'
'Acid Wash'