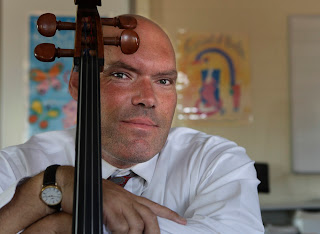 Kevin Gillam: is a West Australian poet with three books of poetry published,  "Other Gravities"(2003) and "Permitted to Fall"(2007) with Sunline Press, and "Songs sul G" in 'Two Poets' with Fremantle Press (2011). He has also had two chapbooks published with Picaro Press, "shouting, drowning" (2006) and "closer to now"(2009). He works as Director of Music at Christ Church Grammar School.

My first poems were written while studying creative writing at Curtin University (Post Grad Diploma) and I enjoyed the succinctness of the form and the fact that it could be left open to a variety of interpretations.

Tell me about the first poem you had published.

The first poem I had published was an extract from a short story that I had sent to Grok, the Curtin Uni newspaper. They had taken a portion of the story and printed it in the poetry section. So I thought that if they liked the excerpt as a poem, then I should concentrate on this type of writing.

What is your usual writing routine? Do you write every day?

Yes, I write every day, and my routine is to collect lines/thoughts and then talk them through in my head on long walks. Upon returning from a walk, I immediately write down the lines concocted, and then later deduce a form.

What advice would you give a would-be poet?

Write down all your thoughts as they come to you….you won’t remember them later. Read lots of contemporary poetry. Join a writing group or association and write/share ideas. Send out poems to journals. Subscribe to as many poetry journals as possible. Try reviewing some recent poetry and send reviews to appropriate journals.

What’s your opinion of self publishing? Would you recommend it?

I’m not against self-publishing, but I wouldn’t recommend it to any aspiring poet. Better to get your work published in some reputable journals and enter some poetry competitions. Then you have an established and creditable body of acknowledged work to send to a publisher.

Yes I do perform my poetry, sometimes with ‘cello music spliced between the lines. Performed poetry needs to be immediately accessible to the listener (no chance of re-reading or re-hearing!), and needs to embrace the mood and emotions of the performance and surrounds as much as rely purely upon the text.

Have you been inspired or influenced by a particular poet’s work? How did it affect your own work?

One of my favourite poets is Sylvia Plath. I love the way the poems live on the edge of literal meaning and symbolism, and the use of diction is superb. I try to emulate this in my own work, leaving a poem open to a number of readings.

If you had to choose a favourite Australian contemporary poet who would it be and what makes them your favourite?

I don’t have a favourite Australian poet, but I read a fair amount of Australian fiction including work by Richard Flanagan, Tim Winton, Gail Jones and Peter Carey.

What about the masters? Who would you choose and why?

I would have to include Sylvia Plath, Dorothy Porter and Seamus Heaney. All three use language and form to intensify to poetic intent.

Could you please send me a favourite poem of your own to be published on the blog?

the unwritten blue was first published by Fremantle Press in 2011. The poem tracks some thoughts/ideas/images from a holiday in Nannup, and was an attempt of mine to embrace a more ‘prose-like’ feel in the poetry. It was awarded 1st Prize in the Reason-Brisbane Poetry Award in 2010.

remember, in that bruised light – we had dozed in
the loft of the A-frame, woken
then walked – the tuarts browning skyward, warblers

and wagtails flitting – you were talking about that book
‘Life of Pi’- then the river, fat, white froth,
moving left to right as if having been read.

already being reclaimed by bracken. you went to touch it,
saw an ant, pulled away. we were silent then,
hushed by fate and its casual cruelty,

late afternoon painting in charcoal around us.
re-tracing our steps, a symphony of drips
and burps from rain and frogs, you on about

slivered moons and life and fiction and
narrative’s tidal pull. it was then,
in that falter in your voice,

that staccato within legato, that you hinted
at some loss deeper than sense.
that night, in the warm cusp of the A-frame –

the tropical triangle we called it,
pot-belly below having been going all day –
you told me about your twin sister that

died at birth, how some days you saw her
as a bird, flying above and ahead, calls of
kinship or warning, other days as the sky,

how you’d noticed, out walking and looking up,
that while the gates and letterboxes and gardens stayed still,
the clouds and unwritten blue moved with you