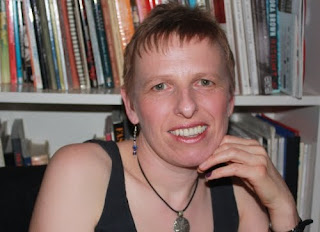 JANET JACKSON is a writer and editor and a poet of page, screen and microphone. Her poems have appeared in print and online media including Westerly, Mattoid, BLAST, The West Australian, nthposition (UK) and Hamilton Stone Review (US).

I enjoyed writing poetry in primary school, but only got into it seriously during my honours year at uni. I used to write long letters to my mother; she said I had talent as a writer and should maybe do something with it. I bought a small notebook that would fit in my bag, and when I wrote, the words came out in short lines. If I'd been carrying a satchel instead of a handbag perhaps I would have become a novelist instead. But probably not.
I enjoy writing poetry because it's a very flexible, free artform - you can do anything - constrain yourself as little or as much as you like - and I like the way the patterns and sounds create the spirit, the feeling of the poem. I also enjoy the intellectual aspect of it - looking up the etymologies of words, learning the history of the language, learning about other people's poetry.
Tell me about the first poem you had published. What was it about?
In year 4 I wrote a poem called 'Machines' which the class performed, with actions, for the parents at an assembly. That's my first memory of a poem being shared with the world!
'A female poem' was published in 'Mattoid' in 1991. You can read it online at www.proximitypoetry.com/Writing/Poems/1991-1995/female.html
What is your usual writing routine? Do you write every day?
It depends what else is going on in my life and how I feel. Sometimes I write nothing for days or even weeks. At the moment an ideal day means writing and editing in the morning before I go near the Internet! But poems can strike at any moment. I write late at night, too. And on trains. And at readings. And during meals. When I teach workshops and classes I write along with the students.
What advice would you give a would-be poet?
Read as much poetry as you can. Find a writing group (online or face-to-face) or an editor or mentor who will give you honest feedback and help you improve your poems.
What’s your opinion of self publishing? Would you recommend it?
Yes! With books, in terms of distribution, if you're prepared to do the legwork, it's at least as good as publishing with a small press. With a lot of hard work you might actually break even. But only if you first learn the craft - it takes time and practice - and build up your audience by doing readings, networking, and publishing in magazines. People don't buy books, or e-books, by poets whose work they don't know.
If, for whatever reason, you want status in the Australian literary world, your self-published book needs to be reviewed in literary magazines or newspapers, and that's a hard thing to pull off.
Do you perform your poetry? What are the differences between writing for the page and writing for the stage?
Yes - I'm probably known more for performing than for publishing.
The main difference is that, in our culture, poems are read or recited only once - the audience never call out 'again! again!' - so there's no way to 'rewind' for a second or third hearing. So if you are writing only for performance, the audience needs to 'get it' in one go, which is limiting.
Have you been inspired or influenced by a particular poet’s work? How did it affect your own work?
Lately I've been reading classical Chinese poetry, such as the poems of Li Po. There's a sense of heightened awareness, not just of the world, but of the words themselves - almost every word has multiple connotations and layers of meaning, so that even a very short poem can have a lot of depth.
If you had to choose a favourite contemporary poet who would it be and what makes them your favourite?
Steve Smart. Because of the outrage, the sadness, the emotional nakedness. He really does write for performance, to connect with an audience. I don't think you can appreciate his poetry by silently reading the text - it needs to be said aloud.
For technical virtuosity and delight in language, I'd recommend Geoff Lemon.
What about the masters? Who would you choose and why?
Louis MacNeice, for the colour of his sound.
Choose a favourite one of your own poems to be published with your interview.

Why is it your favourite?

I don't have a favourite, but I think this one is one of my best, in terms of technical accomplishment as well as impact.

Where was it first published?

What was the inspiration for, or story behind, the piece?

My visit to Dublin in 2005.
Celtic knots
(St Audoen’s Church, Dublin, 2005)
Temple of history, temple
of short lives long
gone, temple of hundreds
of souls… trod
on me hard as I trod
on its layers
of graves. Quiet
spirits whispered hundreds
of hushes
from the eleventh-
century walls.
If I ever go to church in Dublin this is where.
Not in St Patrick’s with its souvenir stalls.
If I go back to Dublin,
if I take you there,
let me take you to St Audoen’s
on a Sunday when the congregation sit,
sing, kneel and pray
where their people have prayed
for a thousand years.
Used continuously since the Normans built it.
Centuries of extension, of chapels and courtyards.
In the fourteenth century, a square tower
with battlements
and bells.
Centuries of loss. Roofs taken off
to escape the roof tax. Gravestones and monuments
weathering away. Dirt building up, the ground rising
in layers of rubble. The townspeople crowding,
singing, chattering, hanging their washing
wall to wall in the roofless buildings.
Stone turning black in the tower.
Bells ringing.
Ringing bells. Re-roofing. Hanging cables. Excavating.
Discovering a cobbled way, a metre wide.
Leaving a section uncovered. Roped off,
with a sign asking us to imagine the people
who walked on the cobbles hundreds of years ago.
Ghosts projected on the ancient wall
in silverblue light, with ethereal music.
Walking. Going, coming. Living on.
Two tourists; a visiting priest; the guide.
Hush, said the ghosts of St Audoen’s.
Hush. This is not St Patrick’s.
Still your chattering modern mouths.
Listen for us and you will hear us
in the hush.
There was a lucky stone, a four-foot ovoid,
pitted and worn with time and touch,
Celtic symbols just visible.
Once stolen, but soon returned.
(The thief had to bring it back: it got heavier
and heavier.) Older than this oldest church,
made by people at the edge of memory.
People who knew how to make symbols
in the way of the land and the layers,
in the way of the earth and her children.
Writing this I touch the necklace
I bought in a souvenir shop in O’Connell street.
A cheap thing, but its four Celtic knots
are enough.
The other tourist touched the stone. For luck.
I didn’t. Couldn’t.
I am too new, too full of dirty salt,
not clean enough.
Old eyes look at me from my wall.
A print: a painting
in which a face appears like a vision
in a stone.
— What are you writing now? the eyes say.
— I’m writing about St Audoen’s.
Have you been there? Did you hear the hush?
Did you touch the lucky stone?
— Do a good job of it then, the eyes say.
— It’s only a sketch for now. Getting it down — you know.
— That’s the way.
I didn’t touch the stone. But my luck was in.
Arms held me, eyes met me, streets
and stones and the river spoke to me.
I was knotted into the strands of Dublin.
Raw ends joined, a pattern completed,
and the rough, the narrow, the cobbled path
took me home.